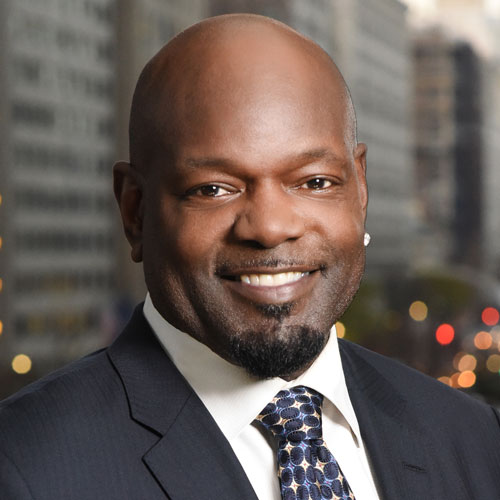 Pro Football Hall of Fame Running Back
Businessman and Entrepreneur

Emmitt Smith is a professional football icon and one of the greatest to ever play the game. In his 15 seasons as a running back in the National Football League, Smith amassed many records that still stand today, including most career rushing yards and most career rushing touchdowns. Smith’s impressive resume includes three Super Bowl championship rings, his induction into the Pro Football Hall of Fame in 2010, and, most recently in 2019, his selection to the NFL 100 All-Time Team (a prestigious list honoring the best players of the NFL’s first 100 years).

As a first-round pick in the 1990 NFL Draft, Smith was the cornerstone of the Dallas Cowboys offense for 13 seasons. The eight-time Pro Bowler was the first player in NFL history to rush for more than 1,000 yards in 11 consecutive seasons and on October 27, 2002 he surpassed Walter Payton as the NFL’s all-time leading rusher.

After his playing days, Smith served as a football analyst and then took his television career a step further when he won the third season of ABC’s Dancing with the Stars, during which he was dubbed “the king of effortless cool.” He also added author to his list of accomplishments, publishing Game On, which outlines the principles that helped him succeed both on and off the field.

Smith then transitioned to the role of businessman and entrepreneur and runs several companies spanning real estate, construction, and technology. He is active in charitable outreach in the Dallas area and on a national level, providing educational opportunities and unique experiences for underserved youth. Smith resides in Dallas and, among his athletic accomplishments and business endeavors, is foremost a father of five kids.

Priming for the Future

Time is money and profitability is paramount. The C5 Summit means access to an extensive network of real estate players and pros, investors, developers, and financiers ready to get down to business and negotiate your next deal.

A Reimagined Expo Experience That Caters to Business

You are beyond busy, investing your time in an event must be more than worthwhile. That’s why, at the C5 Summit, the entire commercial property value chain is represented—from financing and development, to sales and property management, so you can connect with all the right people, all in one place, in an atmosphere conducive to making business connections. Sponsorship Prospectus coming soon.

Get the latest news on schedule, speakers, exhibitors, and event formats.